We are the hollow men
We are the stuffed men
Leaning together
Headpiece filled with straw. Alas!
Our dried voices, when
We whisper together
Are quiet and meaningless
As wind in dry grass
Or rats' feet over broken glass
In our dry cellar

Those who have crossed
With direct eyes, to death's other Kingdom
Remember us-if at all-not as lost
Violent souls, but only
As the hollow men
The stuffed men.

Eyes I dare not meet in dreams
In death's dream kingdom
These do not appear:
There, the eyes are
Sunlight on a broken column
There, is a tree swinging
And voices are
In the wind's singing
More distant and more solemn
Than a fading star.

Let me be no nearer
In death's dream kingdom
Let me also wear
Such deliberate disguises
Rat's coat, crowskin, crossed staves
In a field
Behaving as the wind behaves
No nearer-

Not that final meeting
In the twilight kingdom

This is the dead land
This is cactus land
Here the stone images
Are raised, here they receive
The supplication of a dead man's hand
Under the twinkle of a fading star.

Is it like this
In death's other kingdom
Waking alone
At the hour when we are
Trembling with tenderness
Lips that would kiss
Form prayers to broken stone.

Sightless, unless
The eyes reappear
As the perpetual star
Multifoliate rose
Of death's twilight kingdom
The hope only
Of empty men.

Some of my fondest memories, in my life in magic, have been sessioning with other magicians.  As a 14 year old kid in Cincinnati, every Saturday morning, my pal Shawn Greer would pick me up in his shitty, little red Chevette.  We would make the trek across town to our mentor, Larry Pringle’s house.  There we would meet with Larry, Ken Bierly, Roscoe Harrison and sometimes Paul Swinford would come over.  This went on for years and created a strong foundation for my study in magic.

What do you do at a session?  Perform, learn, grow and feel the power of entertainment!  The best sessions have  people with a variety of skill levels.  This is nice because if you have the knowledge and skill you can help others.  If you are a beginner you have the best opportunity to get fooled badly AND a great opportunity to get pointers on how to do it better. . . or just right.

The important thing is that everybody participate.  Sitting around a table is best.  Close-up pads, optional.  I usually feel that close-up pads are for pussies.  Derek Dingle taught me at an early age, that you should be able to do your best work on a wet bar.  No one really wants to perform on a wet bar, but his point is good.  A close-up pad doesn’t reflect real world performing conditions when you’re out and about.  Everyone should participate.  I am particularly fond of the Round Robin.  A must at any session.  A Round Robin is where you go around the table and everyone does a trick.  This is important for growth.  Of course no one is forced to do anything they don’t want to, but the session is about going out of your comfort zone for the purpose of bettering your magic.

Sometimes you just want to see how a trick looks and feels before showing to the public.  Sometimes you want a critical evaluation of what you are doing.  Both are extremely helpful.  In between group sessions Shawn and I would session several nights a week till the wee hours using harsh and slurred phrases like, “Flash!  or FLASH LIKE HELL!”.  We were unrelenting and learned how not to flash.

It is not uncommon for new magicians to focus completely on what they are doing technically.  They stare at their hands, mumble their words and forget who they are performing for.  I remember my dad asking me as an 11 year old, “who are you doing the trick for. . . me or you?”.  Good lesson to learn early on.  The magic session is a terrific place to come out of your shell.  There is safety, concern and love of the art at a session.

When I was a kid,I took magic lessons from  guy named Paul Rolling who worked at Haines House of Cards in Norwood, Ohio.  I must have been 10 or eleven years old.  My folks had just divorced  and my mom wasn’t really dealing with her grief and anger so well.  As for us four kids, we all just did the best we could.  I found a home at the magic shop and became a fixture.  Cincinnati had a great magic scene,  and I felt like Alice in Wonderland.   At some point the sessions left Larry’s basement and we met Saturday afternoons on the stage or in the back room of Haines House of Cards. 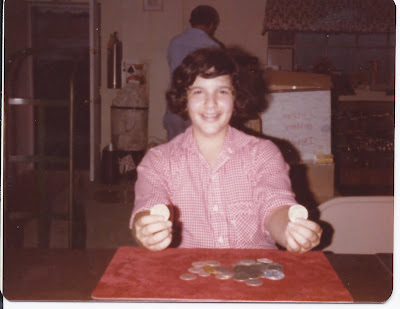 There I would hear of the epic “back room” sessions across the country both current and past.  Names like Dia Vernon, Ed Marlo, T. Nelson Downs & Malini.  What round table in Chicago?  Magic Castle!  What’s that?  As a youngster I romanticized what it might be like to hang out with Dai Vernon at the Magic Castle.  A decade later that dream would come true when I moved to LA.  I was 21 years old and lived with Sylvester the Jester.  It was a non stop magic session for 2 years.


I owned magic shops for a dozen years and couldn’t begin to count the number of sessions that were held in the back rooms.  A right of passage, entrance to a welcoming world of like mined people. What could be better? During my shop years, you never knew who was going to come in.  People like Sal Piacente, or David Ben, Stephen Minch, Robert Giobbi, Johnathan Pendragon, Mike Ammar, Lee Asher, Aaron Fisher and a ton of people you never heard of, but who were great! It was common to see a sign on my shop door that said, “In the back room, ring the bell”.  I had installed a wireless doorbell to inform me that customers wanted to enter.  When my last shop, Seattle Magic closed, at the request of Tim Flynn & Steve Ameden we continued the sessions at my Alki Beach Magic Studio.  For the next two years, every Tuesday night (I don’t think we missed one) I hosted a session that grew into an amazing weekly event.  Friendships formed, tricks learned and polished, cocktails and beers consumed, cigars and cigarettes smoked and cards shuffled. 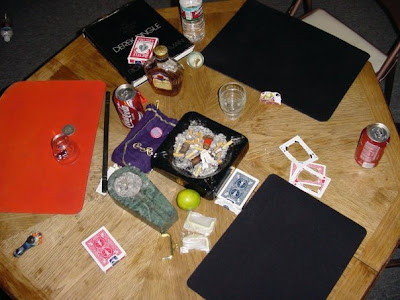 Magic sessions are only as good as the people there.  Are there those who want to share their knowledge?  Anyone looking to learn a new trick, sleight or subtlety?  Who just wants to have fun and talk magic?  I DO!

Now it’s your turn.  Pick up the phone call a couple of your magicians friends. Set up a time to meet at your house or a coffee shop, or a bar. Get your cards and coins, color changing  knives and packet tricks in your close-up case and get it going!  Bring something to take notes or a video camera.  Keep track of what you’re learning and do it again next week and log progress.  It’s not about blowing smoke up your ass, it’s about getting better at what you love.  Make it as good as it can be. . . then make it better!
Posted by Tom Frank at 3:52 PM 3 comments: Links to this post