Flash from the past

Posted by Tom Frank at 11:52 PM No comments: Links to this post

Email ThisBlogThis!Share to TwitterShare to FacebookShare to Pinterest
Labels: Videos 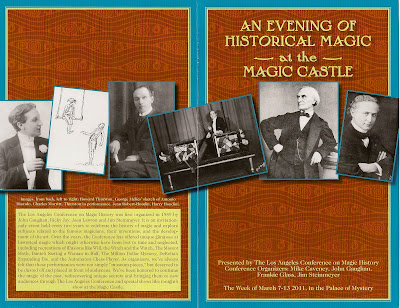 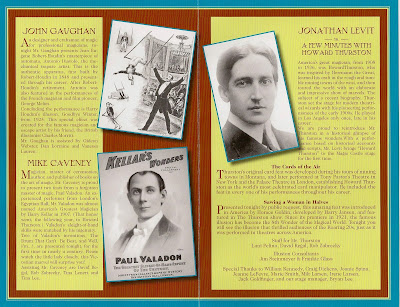 Posted by Tom Frank at 1:47 PM No comments: Links to this post 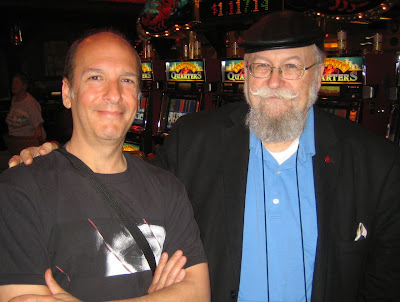 One of the highlights for me was meeting Bill Palmer, curator of the Cups & Balls Museum. Although Bill and I have corresponded in the past, we had never met face to face. What a pleasure to meet the man with the finest cup collection in the world! What I didn't realize with the vast depth of knowledge Bill has concerning all things Cups and Balls. I had a conversation with him that I couldn't have had with anyone else on the planet. His dedication to collecting cups, researching information regarding manufacturers, styles, eras, history, design, performers was MIND BOGGLING! I certainly plan to make a pilgrimage to Texas one day to experience his collection/museum and play with his toys! 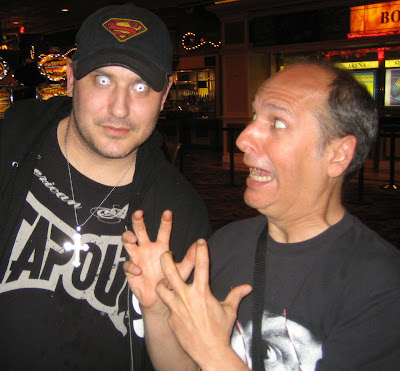 The great thing about going to magic conventions is, you never know who you might run into and you never know what you might see. Here I am hanging w/ Morgan Strebler "The Man who bends Steel". I had met Morgan once before in LA, but never spent any time with him. While hanging out at the Alligator Bar at The Orleans, Morgan performed an original effect called Molten. I had never seen Morgan perform, and I must say I was impressed. His technique and his acting ability. . . right on the money! If you haven't seen this interesting routine, check it out! 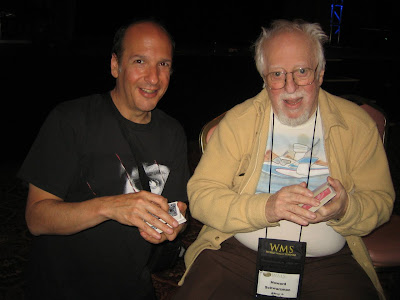 Also in attendance was Howie Schwartzman, I have fond memories of Howie giving me advice on the SWE Shift as a 14 or 15 year old kid. The world of magic so rich with personalities like Howie. Howie used to attend all the conventions back in the day as a dealer. He was the only US distributor for the Anverdi Line of Magic from Europe. Years ago I bought a trick from him where you could put a scarf through a mirror, or visibly penetrate the mirror with a sponge ball. It was a very visual effect that I used to include in my comedy club act.
Posted by Tom Frank at 12:33 PM No comments: Links to this post 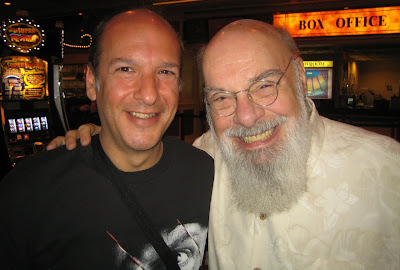 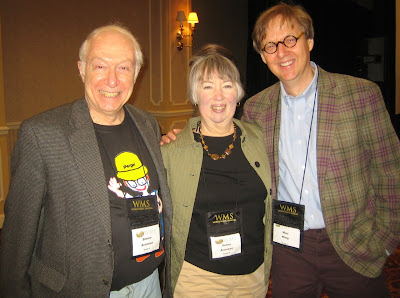 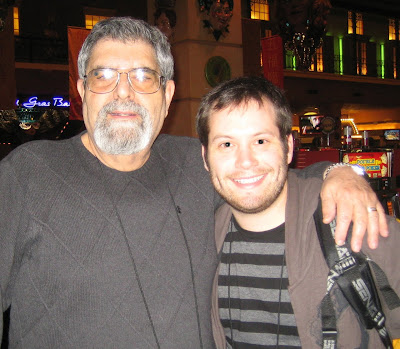 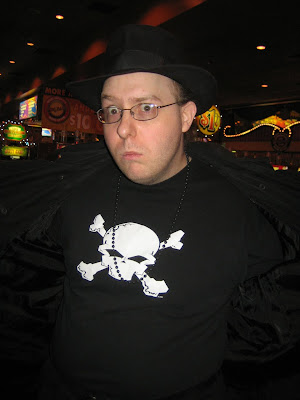 Bizzaro
Posted by Tom Frank at 10:38 AM No comments: Links to this post

I shot this footage in the late 1980's at the Historic Emery Theater in downtown Cincinnati, Ohio

Posted by Tom Frank at 3:43 PM No comments: Links to this post

I love magic conventions, been going to them for 33 years. My first one was the Wizards Conclave in Cleveland 1978; I took second place in the junior close-up contest. Seems like a lifetime (or 2) ago. I was 12 years old. In subsequent years, through my adolesence I would regularly attend the Magi-Fest in Columbus, Ohio. That's where I would meet Gary Plants. 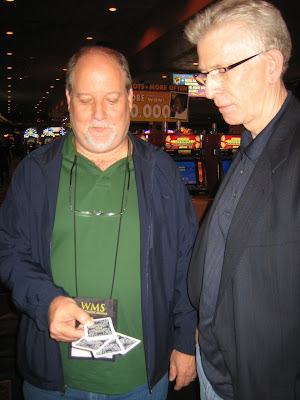 Gary (on left) is a hardcore underground card man. Back in the day when the best sessions at the Magi-Fest were hosted by Bill Miesel in the Precursor Suite, Gary never failed to leave a room full of magicians without their jaws on the floor. Yes, he's that good. As a teenager I had never seen someone do such beautiful bottom dealing. In recent years, he's been manufacturing some of the most diabolically clever custom card gimmicks at his Card Plant in Texas.

Recently Gary and his wife retired from 30+ years in education. He has a sparkle in his eye and spring in his step. His chops are as good as ever and it was a real pleasure to spend some time in his company. In this picture, he's showing Steve and me a wonderful routine of his own construct. I'll see him again, if I head down to San Diego for Magic Con.
Posted by Tom Frank at 3:15 PM No comments: Links to this post

Posted by Tom Frank at 9:55 AM No comments: Links to this post

"Well the joint was jumpin'
going 'round and 'round
Hey! Reelin' and a rockin'
what a crazy sound,
well, they never stopped rockin'
til the moon went down."


As I drove from LA to Vegas earlier in the day I asked myself what I would like to see happen. I decided that it would be fun to be the "Session Room". Every convention I've ever been to, there was one room where the party was. Usually good smoke, booze and close up magicians trying to fool one and other. So that was the plan, see who was around and invite them to the room for a cocktail, card tricks and dialog.

First round was Pat Boucard and a buddy of his who lives in Vegas. They stopped up to the room before going out on the town, Pat asked If I would do some magic for his buddy, I did little cards, coins and linking rings, warming up for what might come later. Sadly that would be the only time I would do the rings while I was there. I was getting hungry so I went to dinner w/ Tim, Steve and Terri. Just great being together again talking about our fair art. Later in the wee hours Steve Brooks came up along w/ Andrew Goldenhersh and a pal of his named Jordan a recent transplant from San Fran to LA. 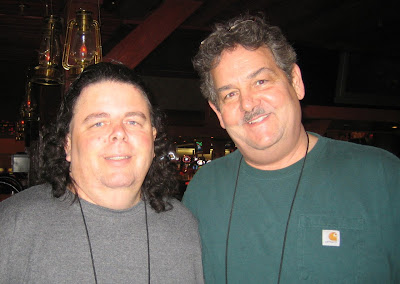 Steve Brooks on the left, Tim Wright on the right. Good guys. Always fun hanging out with them. Steve is the founder of The Magic Cafe (the largest online magic forum, with over 10,000 members). He shared with us the variety of issues that plagues his site and his life. I can't imagine trying to navigate the pot holes in that cyber universe. Trying to keep everyone happy in a world of petty bullshit. . . all I can say is Oy! Although we've only met a few times, I get a very sincere feeling of friendship. It was nice to get to know Steve a bit better, to hear of his background in the Navy on a nuclear sub and his passion for guitar and drumming. You learn somthing new everyday. 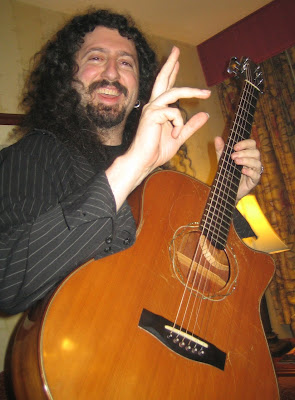 Speaking of guitar, Andrew brought his and played a Michael Hedges' tune just beautifully. It was early in the morning and I was having a blast. Steve split around 3AM and Andrew and Jordan stuck around for another two hours. Jordan did some interesting coin tricks and it was fun getting to know him. We talked about our mutual acquaintances in San Francisco.

Andrew, I've know for the last 5 years or so. We worked the Castle together in the Peller Project last year. I enjoy his company, his music and his magic. I'm lucky and blessed to have such an eclectic group of friends.
Posted by Tom Frank at 8:39 AM No comments: Links to this post

Posted by Tom Frank at 10:35 PM No comments: Links to this post

On my worst day, I have a great life.

Headed to Vegas on a whim, two days into the convention. I take Tuesdays and Wednesdays off (as I work through the weekends) so it seemed a perfect time to catch the last two days of fun at The Orleans Casino on Tropicana Blvd. I left Camp Paradise, Van Nuys, got on the road around noon. The GPS said I would arrive in Vegas at 4:20. Took the 405 to the 101 to the 134 to the 210 to the 15 (all in the first 45 minutes) then it was smooth sailing all the way there. Cigar blazing and the Grateful Dead blaring.

I was excited to meet with the founding two members of The Alki Beach Magic Studio, Tuesday Night Jam Session. This was a session that occurred every Tuesday Night for 2 years in my home in Seattle. Tim Flynn & Steve Amaden! Good magicians and good friends, I felt warm and fuzzy as I imagined the fun to come.

Sailed into Vegas early Tuesday evening checked into my room which I had just booked that morning online. Forty two bucks a night, can't beat that. The girl behind the desk asked me if I wanted a smoking room. . . I love Vegas. I checked in, got settled, lit a cigar, set up the bar and plugged in the mini iPod speakers. I wandered downstairs to see if I knew anyone. Lectures were still in session so I wasn't sure how long I would have to wait. It wasn't long before I spotted Tommee Pickles' fire engine red hair walking the casino floor. I called his name and we parked ourselves at a couple of slot machines for a smoke and a chat. 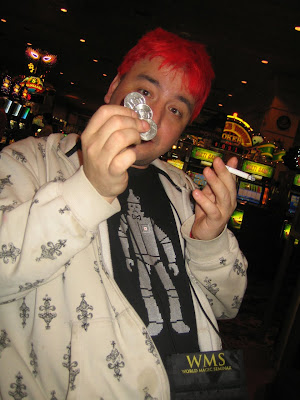 I like Tommee, he's a freak, but I like him. We met a few years ago at an audition for a Burlesque Show. I ended up blowing off the opportunity and he later described it as one of those gigs from hell. Since then we've become friends. He's a fixture at the Magic Castle and I seem to see him whenever I go there.

Tommee's been living in a downtown loft, but is moving to Hollywood a block and a half from the Castle. He favors card, coin and ITR work. He practices a lot and knows many tricks. We worked a Long Beach Busker's Festival together last year and from what I understand, he's been doing shows on Hollywood Blvd. I always have a good time hanging with him. After a bit we parted in different directions. On my quest to find people I knew, I ran into Pat Boucard, a friend of Stevie Weinstein's who I met at the Castle a few years back.

Shortly after that, I ran into Steve Amaden. Pat, Steve, and a guy named Curtis (FB Friend and buddy of Pat's from Kansas), we all found a table in the bar to sit down have some cocktails and do some tricks for each other and the cocktail waitress. I had been there less than an hour and I could tell this was going to be a good time. 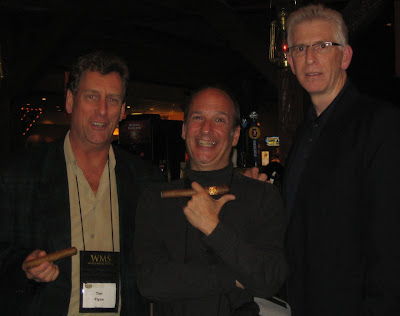 I love Tim & Steve. We all met at my shop in Seattle and they were important figures in the Back Room Scene. Seattle Magic closed in 2004, at the same time I was going through a nightmare of a divorce. Tim and Steve suggested a Tuesday Night Jam Session at my place on Alki Beach. The sessions were epic and I don't think we missed one in the 2 years that followed. I'd seen Tim a couple of times since leaving Seattle almost 5 years ago, but this was the first time I'd seen Steve in a half a decade. Boy time flies. This was Steve's 12th World Magic Seminar, Tim's third, and my second. The last time I went was five years ago hanging with the likes of Roger Klause, Geoff Latta & Mike Gallo. If fact, Steve and I blew off half that convention to spend a lot of time with Roger Klause.

Here we were again, the three of us in all our glory. Tim has grown and developed as a magician and a performer, and Steve, well; we nicknamed him "Butter" years ago, because he has such a smooth touch. 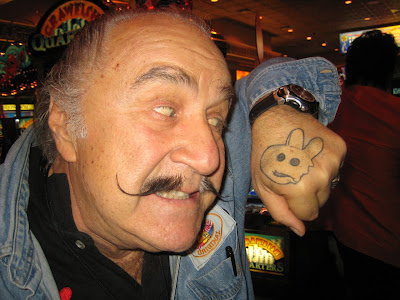 It 's always fun to see Aye Jaye, Magician, Con Man and Carney Galore. Since moving to LA he's been a good friend to me. I saw him, he gave me a big hug and one of the best cigars I had smoked in a while. La Gloria Cubana "Series R". I thanked him, and didn't waste any time lighting it up. Aye Jaye does't live that far from me and occasionally I'll drop by his place on my way home from playing golf.

Magicians everywhere, cocktails, cards, coins, hot and cold running women, cigars. . . I was having a blast.